PEMF, also known as low field magnetic stimulation, is a type of therapy that promotes cellular communication, which in turn enhances self-healing and wellness.

PEMF technology is researched by NASA and doctors more than just about any other available technology out there. There are literally hundreds of PEMF devices delivering this invaluable life force. Some are very powerful and others very subtle. High power PEMF is utilized for recent injuries to accelerate healing. Low power is designed to enhance blood flow. Our research and years of selling PEMF devices culminated in our choice of this technology for clinical and home use- The PureWave. Simply lay on the body mat to fully recharge the body at the cellular level. This is your bio-charger! Unlike high power systems, this product can be used safely by anyone at any age with almost any condition.

Immediate and lasting benefits include:

To watch a video with more information on Step 1, click below. 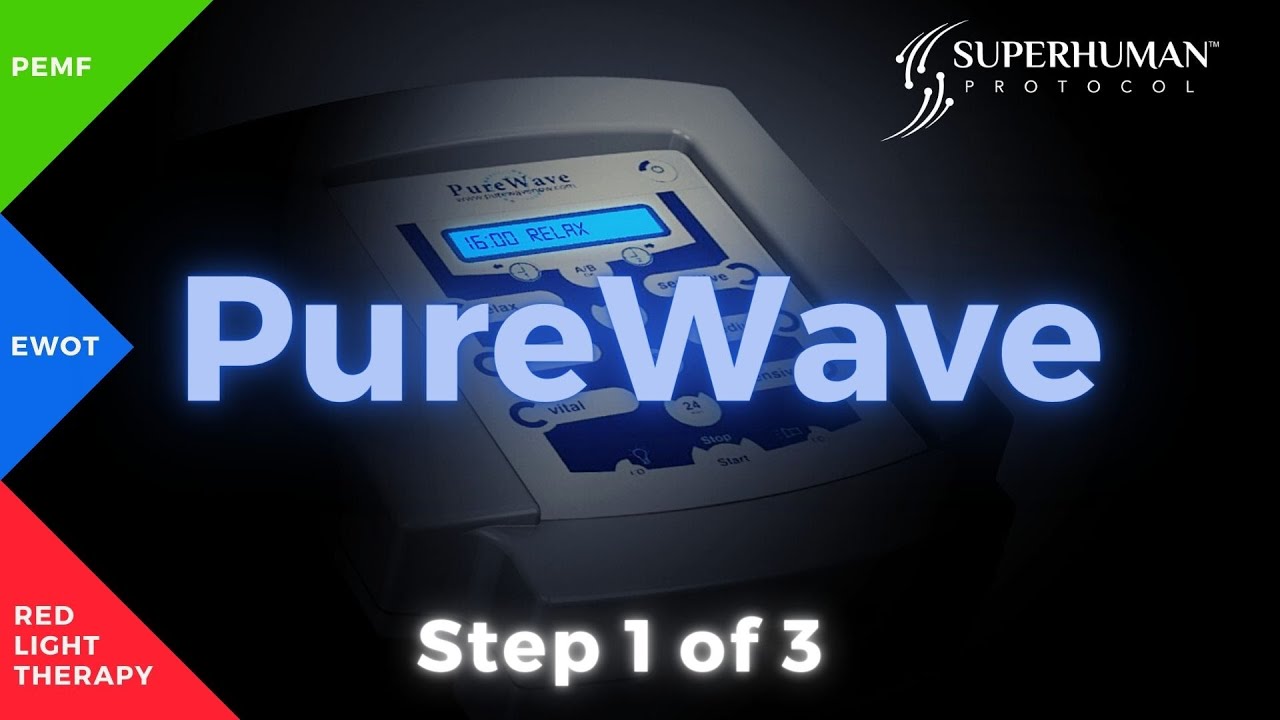 With EWOT, the body is able to create an oxygen-rich environment that improves overall health by getting the heart pumping and delivering oxygen to healthy cells.

Oxygen training is known as EWOT and is being done worldwide to super-oxygenate the body. Deconditioned and super athletes alike are seeing benefits beyond comparison. EWOT has also been adopted by Physicians and Super Regeneration Centers worldwide. If done after PEMF it's even more effective, as O2 transport is optimal. Without PEMF this is not possible. If your cells have a low voltage (low PH) most cells are clumped together and not only is oxygen uptake minimal, but blood flow is drastically reduced. PEMF followed by EWOT HyperMax Oxygen will offer the most effective protocol known in the industry.

Dr. Manfred von Ardenne was an early pioneer in discovering the effects of oxygen on the human body. His many years of research culminated in his book “Oxygen Multistep Therapy,” an in-depth technical review of his findings. Chief amongst his findings is that oxygen not only enhances performance, but it is also boosting immunity. Dr. von Ardennes' work inspired many to study and improve upon his techniques and advancements in the field Read the full body of work Oxygen Multistep Therapy: Physiological and Technical Foundations.

Benefits of the HyperMax Oxygen System:

To watch a video with more information on Step 2, click below. 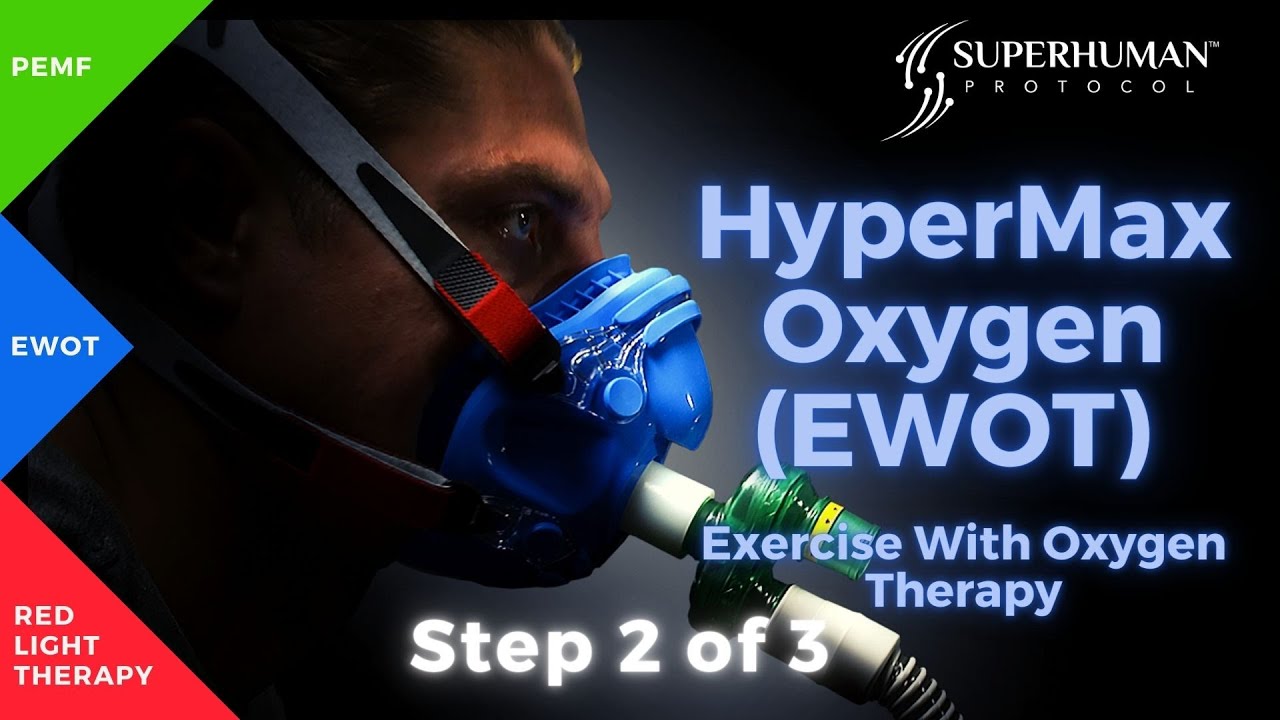 Photobiomodulation therapy (PBMT), previously known as low-level laser therapy is the application of red and near infra-red light over injuries or lesions to improve wound and soft tissue healing, reduce inflammation and give relief for both acute and chronic pain.

PBMT is a light therapy that promotes tissue repair (skin wounds, muscles, tendons, bones, nerves), reduces inflammation or reduces pain. PBMT was previously known as “Low Level Laser Therapy” or “Low Level Light Therapy'' because the light is applied using a low power laser or LED/It is a non-invasive therapy and, unlike drugs, it has no side effects. PBMT is not an ablation or heating-based therapy, it is more akin to photosynthesis with light being absorbed by the cells and catalyzing chemical changes.

When our cells are stressed, they produce a molecule called Nitric Oxide. This molecule blocks the receptor site that Oxygen belongs in during the respiratory process — the process of turning sugar in our blood into cellular energy. Usually, through rest and the consumption of antioxidants, the body is able to dispose of excess Nitric Oxide. However, when stressed the body does not have the capacity to remove enough Nitric Oxide. This leads to molecules known as “reactive oxygen species'' being leaked into the cell. This is known as “Oxidative Stress." Reactive oxygen species are toxic and trigger mechanisms for inflammation, cell death and the expression of genes responsible for cancer, Alzheimer’s, osteoarthritis and more.

Unlike injections and prescriptions which mask the symptoms and do nothing to treat the injury, High-Intensity Light Therapy delivers light energy units, in the form of photons, to damaged cells. These photons, absorbed by the cells through light therapy, stimulate the mitochondria to accelerate the production of Adenosine Triphosphate (ATP). This biochemical increase in cell energy is used to help transform cells from a state of illness to a stable, healthy state. The result is it reduces inflammation, increases blood flow, stimulates tissue growth, and helps aid the body’s own healing process.

Benefits of the TheraLight Bed 360

To watch a video with more information on Step 3, click below. 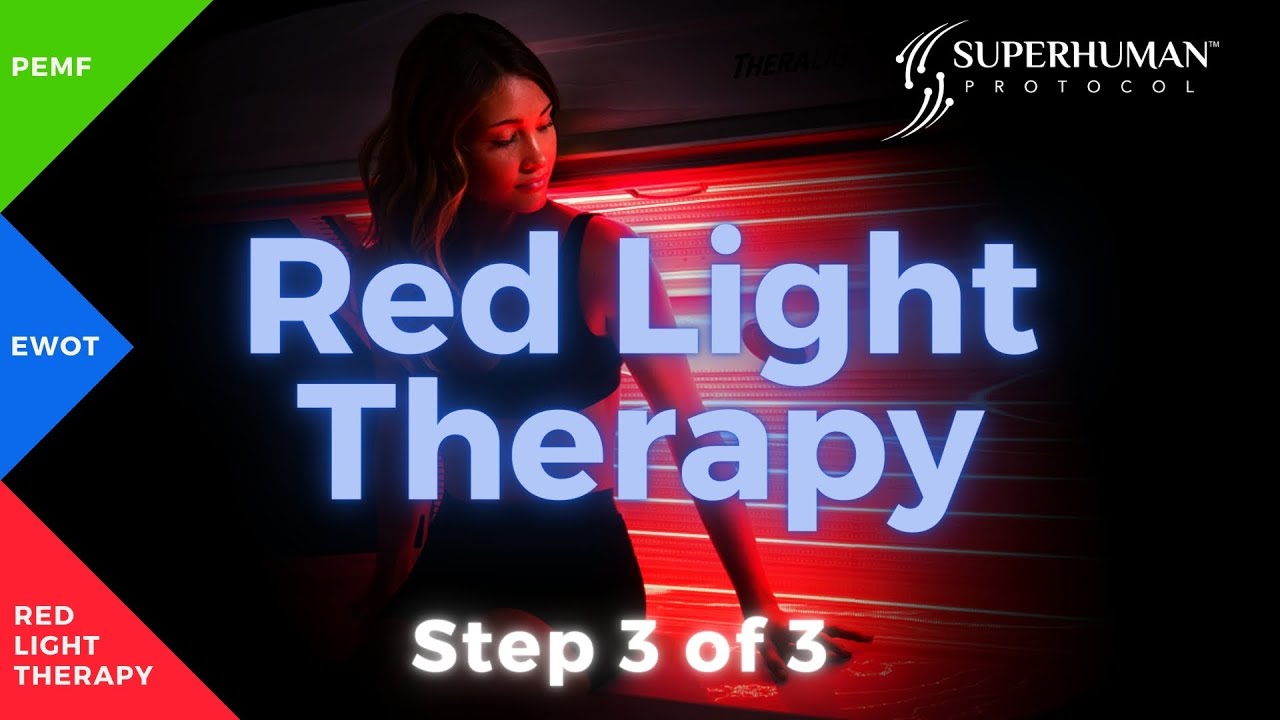 When I came into Keri's office I weighed 83 lbs and hadn't felt right for quite some time. I felt full all of the time, even though I was only eating small amounts. I was also very emotional and just felt off. Everyday tasks that used to come naturally for me, had become difficult due to a low energy level. After losing almost 40 lbs in 3 years(9 months of that time I was pregnant) and not getting the answers we were looking for, my husband heard about Keri on Angie Rose's radio show. He had me call the next day. We had decided to meet for the free consultation and were ready to try something new. 2 months into the NES wellness program I had already gained 2 pounds! It was gradual at 1st but by the end of the 6 month program I had gained almost 15 pounds! After 3 years of absolutely no weight gain I am very pleased with the progress! Not only has my appetite and overall digestion improved drastically, my memory has improved and my emotions have balanced out. Plus I am able to maintain a healthy energy level again, which makes everyday life much easier! Keri helped me with my health goals by helping me find supplements that helped support my overall health. She also helped me make some necessary dietary changes by using Kinesiology. Keri was very kind and supportive starting from our first phone conversation! She has been very understanding and willing to answer any questions I had on my wellness journey. She is also very dedicated to helping people like me who need support in their overall wellness! I would definitely recommend Keri to anyone who is wanting to enhance their overall well being.

Give Alternative Answers a call today, (308) 201-1166, and one of our Naturopathic Doctors in Grand Island, NE, will help you to get started on a path to healing by finding your health challenges and addressing them head-on.